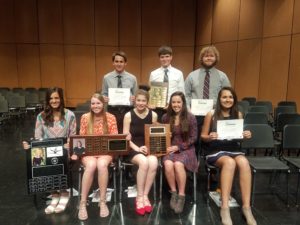 The Linn-Mar School Foundation is privileged to manage a number of scholarship and memorial funds. These funds were created by individuals and families who chose to honor special people or interests by investing in the future of Linn-Mar students.

An invitation to apply for scholarships is distributed to parents of graduating seniors in the winter each year with applications due January 31st.  Scholarship awards will be presented at senior recognition night each May and payable to the recipient’s college financial aid office in July.

Applications and requirements vary by scholarship and are available on Family Connection and through the Linn-Mar High School College & Career planning center.

Annual scholarship funds can be created with a minimum of $1,000 gift and $25,000 for endowed named scholarships.  For more information on investing in a scholarship fund contact Executive Director Shelley Woods at 447-3065 or swoods@linnmar.k12.ia.us.

Melissa Ann Brendes Memorial Scholarship established in 2008, recognizes a passion for dance and children in the name of 2005 Linn-Mar graduate, Melissa Ann Brendes.  Applicants must be active in dance performance, Poms, show choir, theatre or at a dance studio.

Dayton & Marilyn Sippy Scholarship – These long-time Marion residents created a scholarship in 1998 to support Linn-Mar students with the pursuit of higher education and meaningful employment.

Aggarwal Family Scholarship For Educational Excellence – This new scholarship was established in 2016 and support the plans of two Linn-Mar students attending any accredited two or four year school or technical program.  The Aggarwal family and Linn-Mar graduates Summet Aggarwal, 2000 & Manish Aggarwal, 2004 wanted a way to support students and give back to the school district they gained so much from.  Demonstration of financial need is important.

Sunrise Rotary Club Award was created to inspire “service above self”, the Rotary International motto. This scholarship established in 1996 recognizes success at Linn-Mar and an interest in further education.

Linn-Mar Student Council Scholarship in memory of Selena Apodaca and Bella Severson
Sisters Selena Apodaca and Bella Severson, students of the Linn-Mar Community School District, were tragically lost in a car accident on the third of November, 2016. The loss was devastating to their families, friends and to the entire Linn-Mar community. Linn-Mar unified in support of those in mourning and to remember the lives of Selena and Bella. It is in this remembrance that the Linn-Mar student council has chosen to honor the memory of the sisters in the form of a scholarship. The scholarship has been created with the help of family and friends to be awarded to an individual who possesses similar character traits and values to those of Selena and Bella, such as love of family and friends, strong willed, outgoing, free-spirited, and tough in the face of challenges.

Pagel Family Scholarship was established in 2010. This scholarship recognizes a student who has developed a “Spiritual Transistion Plan” while attending college.

Nick Wilwert Tennis Scholarship – This scholarship will be awarded 2016-2018 and supports a Linn-Mar men’s tennis team member who best reflects Nick Wilwert’s caring nature and dedication to others reflected in his support of student athletes and in his community.

Marion Firefighters Association Scholarship – New scholarship in 2018 established by the Marion Firefighters Association (MFFA). MFFA is an independent body of volunteer and career firefighters that serve the city of Marion, Iowa and Marion township. The purpose of this scholarship is to provide financial assistance to students in the community seeking a career path in Fire Science and/or EMT/Paramedic. In order to obtain careers in these fields, people are required to obtain designations that can be costly. By providing this scholarship, it is MFFA’s desire to encourage students to pursue this valuable career path not only for the Marion community but for all communities.

Linn County State Bank Scholarship – This scholarship was established in 2008 and supports the plans of an outstanding Linn-Mar graduate who plans to further their education in business with an emphasis in accounting or investments.